During the years when booze was a constant in my life, I very rarely considered not drinking. Yes, it was always at the root of all the disasters that kept on springing up, hitting me repeatedly, trying to drive the message home.

“Coming back for more…? OK, here’s another drunken, messed up relationship with someone who does nothing for you.

Here’s an entire weekend spent lying in bed crying, not daring to face the world.

Take this massive blast of shame, can you believe you REALLY did that??”

I did n’t care, drinking would not harm me

And yes, I was fully aware of all the health harms I was subjecting myself to, but really, I didn’t care all that much. I wasn’t in a place where I held myself in especially high esteem and so it was easy to keep on knocking back the wine. Plus, in the name of denial, I think I had a fairly strong hold on the notion that I was somehow not like everyone else.  My liver would be able to withstand the regular battering, and maybe, just maybe, I’d be able to outrun the immense self-abuse and live well into my eighties.

When I started not drinking

I stopped drinking because I was scared to death that if I picked up one more glass of the stuff, it could kill me. I wasn’t being melodramatic.  As soon as I had managed to gain some clarity on the situation I found it utterly remarkable that I hadn’t lost my life in and amongst all of my boozing adventures. The nights I had walked home in the early hours – staggered would be more apt   in ill-boding areas of town and as vulnerable as they come. Like a baby bird fallen from the nest; the many, many dramatic falls down staircases and steep driveways, on the ice and in the middle of roads. Countless nights in seedy pubs with seedy people who were capable of dangerous things.

I dreaded a future without drink

So when I first quit, it was with the hope that in doing so I would save my life. I didn’t expect a lot else. Maybe gritting my teeth, gazing lustfully towards drinkers who appeared so happy and carefree with their alcoholic beverages to hand. Maybe I suppose a feeling of ‘doing the right thing’ – like I was being a good girl now that I was all grown-up and dealing with my little problem.

Beneath all of that, however, I was dreading this new life I’d committed myself to. It stretched out before me like an endless parched landscape of drabness. I expected at that point to be left wanting for the rest of my days.

Five years on, I’m really quite shocked at all of the goodness that’s emerged from the single act of stopping drinking. I never imagined any of it, couldn’t have seen it coming. I frequently sit back to take stock and ask myself,

“Really? Is this my life? When did it change so massively?”

It’s as though aliens whipped me away one night, did a major overhaul with what I was and then dumped me back down, all new and fixed.

I got my confidence and self esteem back

The things that have happened are direct consequences of me no longer drinking. Mostly they’ve arisen because I got my confidence and self-esteem back, which led me to making better choices. I found the nerve to say no sometimes, without being terrified that the person I was saying it to would hate me for it. I challenged myself with new experiences. Things that resulted in me meeting new people and making friends, because instead of only ever wanting to drink, and drink and drink, I needed – and chose – to seek out more from life.

I got to know who I am

I found the courage required to take risks. Calculated ones that didn’t wind up in disaster as they always had in the past. I began to believe that people might actually like me. So I stopped being so defensive and paranoid, and I opened up to the world in return. I got to know who I am deep down.  What I need in order to be happy, and then I had the self-belief to go out and get it.

I was wrong, not drinking made me happy

I never foresaw any of this when I decided to stop drinking.  All I thought I was doing in making that choice was reducing the risk of dying before my time. It was a knee-jerk reaction. Born entirely out of fear and one that I felt was going to be a hardship. Something that would drag me down and make me miserable forever.

How wrong I was, how unbelievably naïve. I’m so  grateful  that I did it anyway. Not drinking has made me happy.

Sometimes it can take professional support to get these lovely benefits Lucy describes. Lucy herself got professional help.  If this is you, you might find these posts below helpful

Can an alcohol counsellor help you ? 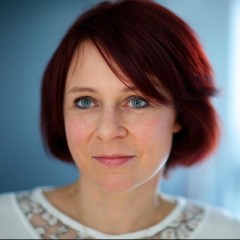 Lucy is the founder of Soberistas. She launched the website in November 2012 after closing the door on a 20-year-long stint of binge drinking. She is Soberistas’ editor, and has written four books on the subject of women and alcohol (The Sober Revolution, Your 6 Week Plan (co-authored with Sarah Turner), Glass Half Full and How to Lead a Happier, Healthier and Alcohol-Free Life). Lucy lives in Sheffield, South Yorkshire.