When I initially stopped drinking I was very nervous about going out and socialising sober. Without the crutch of alcohol would I survive?  I was sure that I would be bored senseless and also be judged boring by those around me.  However, I was determined to go about my life as normal as possible and I didn’t want to live like a hermit now that I had put down the drink.

On the occasions that I did go out, I was well prepared beforehand.  I knew what I was going to drink. I also had a backup drink to fall back to if my preferred alcohol free option was not available.  I choose to drink alcohol free beers. I found they gave a good sense of beery satisfaction and were a godsend in the early days.  By filling my glass with a beer it stopped unwanted attention from people enquiring into my drinking status. Socialising sober wasn’t something that I wanted to broadcast in the early days as I wasn’t yet comfortable with my new change in lifestyle.

Every time, I socialised sober without alcohol at an event that would have been a drinking event in the past, my confidence grew.  Initially, I had dreaded socialising without the crutch of booze, but then I began to look forward to being able to drive to an event. I could enjoy meeting people, engaging with them properly and driving home afterwards, knowing full well I would wake up refreshed the following morning.  I also discovered that if a situation was boring alcohol added nothing to it.  People would just get drunk and get even more boring/morose/ argumentative as the night went on.

After some time I couldn’t hide the fact that I was no longer drinking.  I had built it up in my mind that the people in my life would be extremely interested in this new change and would be trying to get me to drink at any occasion.  Two things happened.  The first was that people were supportive and just said “fair play” and would only mention it again in passing to see if I was still not drinking.

A mirror to our own drinking?

Others would feel the need to tell me that they do not drink that much and so there would be no point in them giving up.  It’s often said that when we stop drinking it holds up a mirror to other drinkers. It forces them to confront their own relationship with alcohol.  If they are not that comfortable with their drinking, they usually feel the need to explain or deny their drinking habits.

People are more wrapped in their own worlds

I have also discovered that people are just generally more wrapped in their own worlds than I realised.  It was quite narcissistic of me to think that they would be overly concerned with me kicking the drink.

Having said that on one or two occasions, when I was socialising sober, I did get people looking at me as if I had lost my marbles and told me that it would only be a matter of time.  Only once did I get a person who asked me outright if I was an alcoholic and I treated this comment with the contempt it deserved.

You can see that preparation is key to managing an alcohol free  social life. Mc D thought carefully about the situations he could handle and took it at a pace that suited him. He used alcohol free beers until he was comfortable saying he did not drink. In his case most people were supportive but when he got a bad reaction from people he did not take it on board. He realised it was the other person’s problem not his. 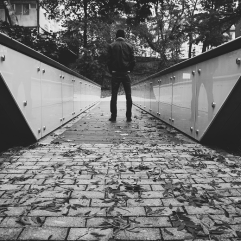 Forty odd father of two trying to find out his place in the universe. When not working for the man, can be found playing with his children and binge watching Netflix